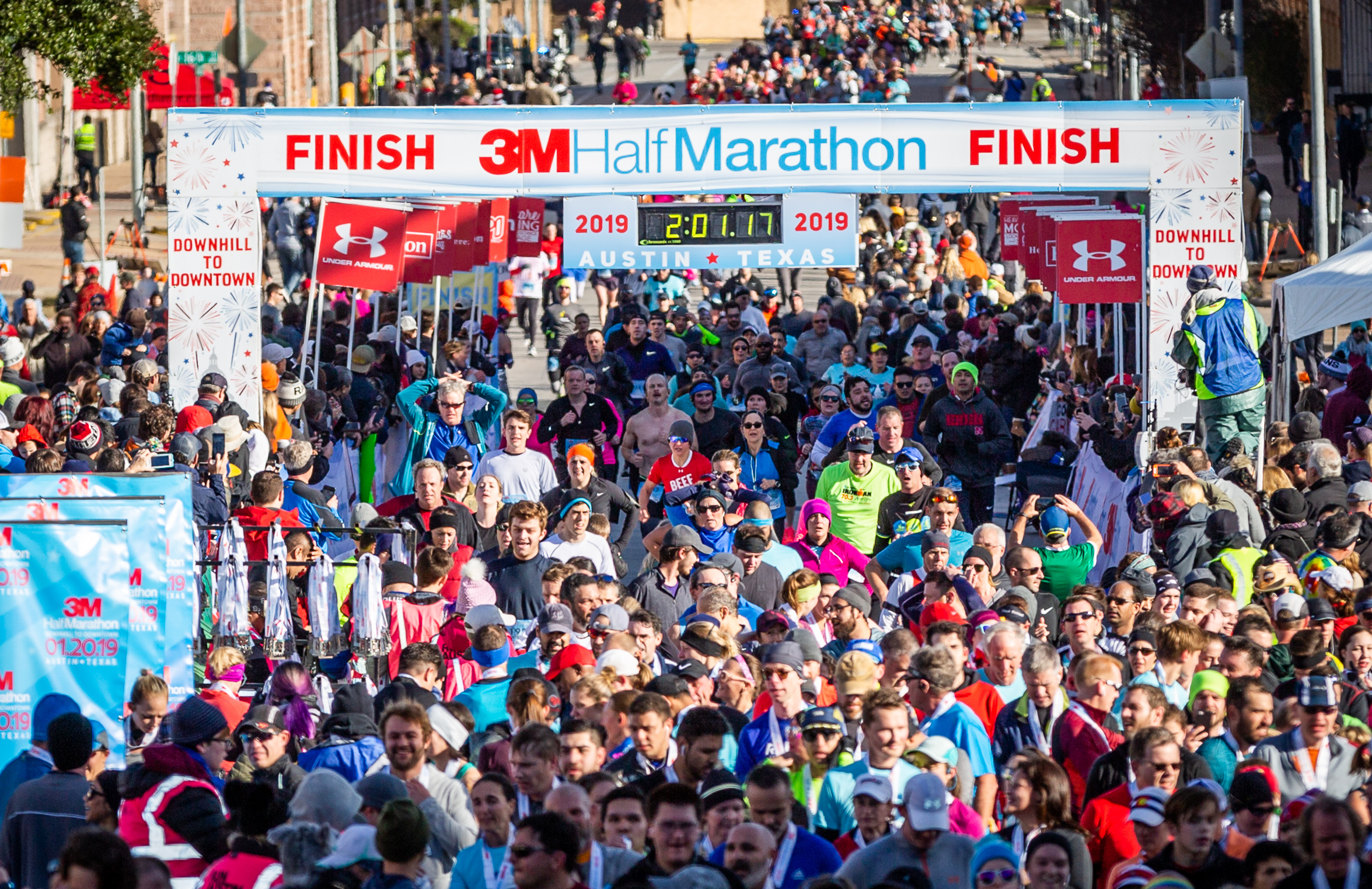 Start time temperature in the mid-30s quickly gave way to a sun-filled sky and slight tailwind at the 25th annual 3M Half Marathon presented by Under Armour on Sunday, January 20th. Nearly 7500 participants registered, the most in event history, for the standalone half marathon. Participants traveled to Austin from 47 states and 13 countries. Memorable performances by thousands were highlighted by numerous PRs, an epic duel between the first and second place males, and a repeat female champion.

“I always love this course, it’s just so fun,” said Courtnee Doyle, who completed her fourth 3M Half Marathon and earned a nine-minute PR. “The conditions today were race-perfect to go fast and get a new PR.”

The elite men provided an exciting race, with a pack of 4-5 running together most of the race. The sprint to the finish featured a dual. Texas State University alumnus Michael “Slim” Morris (1:07:19) crossed the finish line first. Oklahoma City’s Andrew Leahey (1:07:21) gave a hard final push and finished just two seconds after Morris. Monterrey, Mexico’s Ivan Ortiz (1:08:00) completed the overall men’s field. For the second year in a row, Matt McCurdy (1:11:55) was the male Master’s champion. 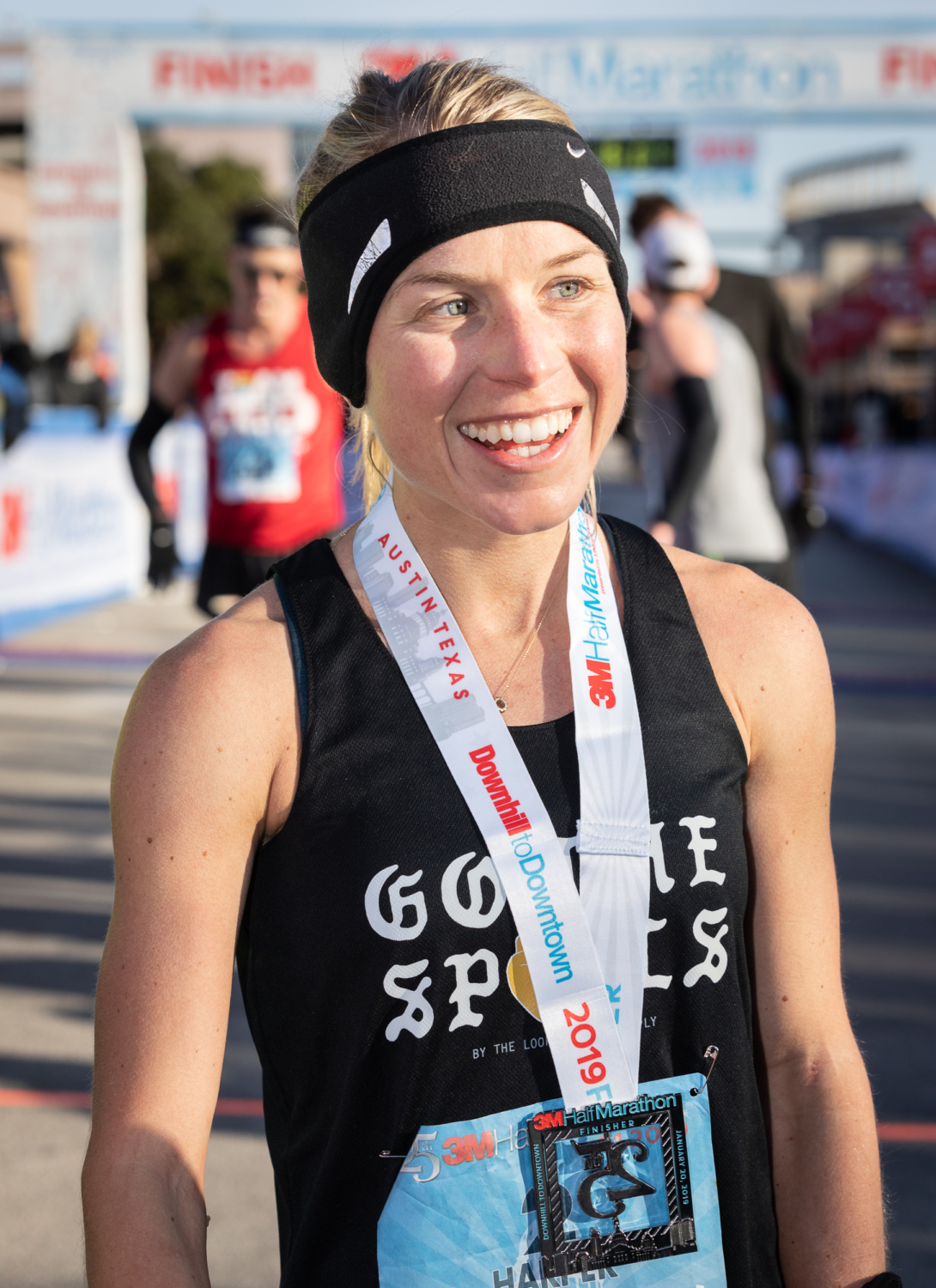 Jess Harper is all smile after her second 3M Half Marathon victory in as many years. Credit – Ed Sparks

Austinite Jessica Harper (1:14:23) was the female champion for the second time in as many years. Emily Parker of Kerrville, Texas, (1:19:00) and Anissa Angelosante of Ypsilanti, Michigan, (1:19:16) finishing second and third respectively. Tammy Bogle (1:27:57) was the top female Master’s finisher for the second year in a row.

Despite chillier than normal temperatures, thousands of spectators lined the Austin streets. They cheered thousands on the point-to-point half marathon course. The course began in north Austin and finished near the Texas State Capitol. Some spectators hosted parties, played musical instruments, and handed out extracurricular nutrition and hydration.

“The energy that the 3M Half Marathon has followed you straight through the city to downtown,” said Jess Carroll, who completed her first 3M Half Marathon in 2:10:04. “The amount of Austin residents that came out to cheer us along the course was truly incredible, the motivation those cheers provide is indescribable.”

For those planning ahead to January 20, 2019, next year’s registration is open and set at the low price of $75. This amazing deal will be available until Wednesday, January 23rd. Don’t miss out on one of the faster half marathon courses in the country. It features the best packet in the industry, full of useful 3M products. Participants can see their results on the 3M Half Marathon website and continue to share their memorable experiences on Facebook, Twitter, and Instagram. Runners can expect their FinisherPix race day photos to be ready in 24-48 hours after the race.

Our expo highlights showcase the booths you have to visit

The 3M Half Marathon Expo & Packet Pick Up is just days away! The expo is a chance for participants to visit our sponsors and partners and check out what they have to offer. From on-course hydration to Official 3M Half Marathon Under Armour gear, below are the expo highlights you can’t miss! There are tons of prizes, giveaways, and discounts. Think of them like Pokemon, you have to visit them all!

There will be several fun photo opportunities set up throughout the expo including our gif photo booth, a larger than life-size version of this year’s finisher medal, Course Maps and more. Be sure to visit them all.

Visit the Austin Marathon (booth #27) to chat with their team about race day! Thinking about registering for the Austin Marathon, half marathon, 5K, or Manzano Mile? Register at their booth and take advantage of their expo deals. BONUS: take a picture in front of their Austin backdrop!

Visit our friends at Fleet Feet Austin (booth #18) and snag your Official 3M Half Marathon Under Armour gear before it’s gone! Supplies are limited. They’ll also have hydration and nutrition for your last-minute needs.

Sample all of nuun hydration’s flavors at booth #33. Say hey and learn how you can win Texas-themed nuun bottles. BONUS: the first 5 people to show up to the nuun booth and complete the following for each day will win one bag of nuun performance.

Airrosti Treatment Teams (booth #44) will offer complimentary injury assessments and taping to any participants suffering from pain or an injury. The assessments are 15-minute appointments.

Ready to Run will have a photo booth contest at booth #13. They’ve designed a custom local Austin backdrop and custom photo props. Visit them, enter the contest, and learn how you can win a pair of Aftershokz Air Wireless Headphones or a $75 Ready to Run gift card.

SPIbelt (booth #11) will have a spinning wheel out sporadically during the event where people can spin to win! Stop by, say hey, learn about their new products, and spin to see what you could win.

Register at the Cap10K booth (booth #39) and receive a free Cap10K pop socket for your mobile device OR a free pair of Cap10K running socks. That’s a great deal for the largest 10K in Texas!

Hilton will have a photo booth set up, raffle wheel, and giveaways at booth #51. Take a picture at their booth and post it online to spin the raffle wheel and win a prize. Visitors that are Honors members or download and enroll with their Honors app will have an opportunity for a second spin at the wheel. Prizes include tote bags, luggage tags, and chances to win a grand prize which includes hotel stays.

Hang on the Heavenly Care Moving (booth #1) bar for 90 seconds and you’re entered into the drawing to win a bike! It’s that simple.

You know about hydration, now learn about how it helps your body

nuun is the official hydration partner of the 3M Half Marathon. They know a thing or two about hydrating athletes. The experts at nuun are constantly gathering information about how athletes can better fuel their bodies. This blog post was written by the experts to educate athletes and provide them with the information needed to be successful during training and racing.

1. Hydration is energy (for your muscles) Most people think that the main purpose of hydration is to help prevent dehydration (and to replenish electrolyte stores that may be lost via sweat). Although both of those are true (recent studies have shown that electrolytes may play greater roles in fluids absorption than sweat replenishment), the fundamental goal of hydration is to deliver oxygen to working muscles. Try to think about the fluid you are consuming as a way of helping your muscles breathe, which in turn gives them the energy they need to perform.

2. Water does not hydrate you

Yes, you read that correctly! While water does fundamentally provide your body with fluid, it does not truly hydrate you. Water needs to be in a specific concentration (composing of carbohydrates and electrolytes) to exit the stomach and move into circulation where it can be used by the body. Our water needs to contain sodium to ensure proper fluid absorption. To make matters even more complicated, your “water” should contain different amounts of carbohydrates and electrolytes before/during/after your workout! It is highly recommended that rather than using tap water, you purchase a filter to ensure all the bad chemicals are removed from it. Having a look a sites such as reviews by Best Products Pro to help you find the best and most beneficial filter possible. You may also benefit from investing in a water softener to improve the quality of the water in your home – click to see.

To put it simply, when you are exercising, your body (stomach) is under stress. There are ways you can eat and drink to mitigate that stress or to encourage it. When it comes to hydration, if the ratio of carbohydrates to fluid is too high or the electrolyte profile is too low, the delivery of fluid slows down and sits in the stomach. That’s what causes sloshing and GI issues during racing.

4. Hydration will help you fuel better

This builds on the previous point. With proper hydration you can help eliminate the GI issues that can come with it and allow faster and more efficient fueling. This is achieved by not overloading your system and using multiple pathways to absorb fluids and carbohydrates.

One area that is very crucial to the recovery process is rehydrating. Rehydrating not only replenishes fluids lost during exercise, but it also aids in replenishing the electrolytes that were also lost. Keep in mind: drinking too much too fast can degrade the potential gains of the workout, here’s why: your body, over time, has developed a strong immune system that helps repair itself when it is under the stresses of exercise. Therefore, naturally you want your body to begin repairing itself, slowly rehydrate, and continue to hydrate throughout the day.

nuun hydration is our official hydration partner. Head over to nuunlife.com to stock up and train with what will be on course.