Following GU’s nutrition planner can help you perform your best

You train for months to chase your 13.1-mile PR at 3M Half Marathon. All of your hard work leads up to Sunday, January 23rd. GU Energy Labs, the Official Energy Gel and Chew of 3M Half Marathon, is here to help you perform your best! Their products are scientifically proven to give you the energy you need. Their on-course Nutrition Station will be near Mile 7.

All aid stations will be stocked with water and Strawberry Lemonade nuun to keep you hydrated on course.

But it is not all about race day. What you do in the days leading up can also impact your performance on the course. Below we will provide some tips and information that you can do before the race.

Fueling Before Running a Half Marathon

During the week before you run a half marathon, you need to focus on both hydration and providing sufficient energy/fueling.  Your calorie intake will be higher than usual and you will increase your carb load. It is also important that you hydrate in the week leading up to race day. You can supplement your water intake with nuun hydration to make sure you are getting the electrolytes your body needs to be sufficiently hydrated come race morning.

When you combine carbohydrate loading and tapering your workouts, you can store more energy in your muscles which will give you more energy sources during your event.

The Mayo Clinic suggests that carb-loading begins one week before the event with another additional increase 1-3 days out. ” Increase your carbohydrate intake to about 8 to 12 grams of carbohydrate per kilogram of body weight. Cut back on foods higher in fat to compensate for the extra carbohydrate-rich foods. Also, scale back your training for three to four days before the event. The combination of eating more carbohydrates and tapering activity appears to boost muscle glycogen stores.

For most athletes, 5 to 7 grams of carbohydrate per kilogram of body weight daily is right for general training. (Note that 1 kilogram equals 2.2 pounds.) Endurance athletes may need up to 12 grams per kilogram.” To give you an idea of carb counts, these foods have 15 grams of carbohydrates:

On race morning you will want to rise early so that you can eat at least 2-3 hours before your start time. This will allow you to digest and not have a heavy stomach. Oversleep? Don’t panic, go with a lighter meal with supplemented liquid or gel carbs. Here are some tips for making sure you’re giving your body what it needs so you perform your best on race day. Planning what to eat during a race can be overwhelming. With so many variables, it’s hard to determine what the “right” answer is for you. When deciding what to eat and drink, we think it’s helpful to break it down by looking at the nutrients your body needs.

A successful nutrition plan takes into account the number of calories your system can handle in an hour. It should also factor in your body’s need for electrolytes, amino acids, water, and protein. When thinking about your nutritional need for a race or training session, it’s important to remember that everyone is different. Every day is different. For example, body size, air temperature, activity type, intensity, and personal preference will affect your nutritional needs.

That’s why we recommend mixing and matching products to find out what works for you. For example, if you prefer to drink your calories, you can bottle up your fuel using ROCTANE Energy Drink. We developed a half marathon Nutrition Planner to help you dial in your plan for race day. We all know things can change on race day, but it helps to start with a plan! Download the Nutrition Planner and follow the steps below.

Here’s how to use our Nutrition Planner

You hear that? That’s your alarm clock going off earlier than normal. Your schedule calls for an early morning run. Now the internal battle begins because your bed is so comfortable and you were really enjoying sleep. Every runner battles themselves in some way every morning. Use one or all six of these tips to make your morning run! Make a playlist that you’ll give two thumbs up!

Create a playlist you love

If you listen to music, knowing you’ll jam during your morning run will help you get up. Set the playlist to coincide with the duration of your run or make a list and put it on shuffle. Singing along will help get you going and make the miles fly by. Need some song recommendations? Follow us on Twitter and check out our #WeLiketheSoundofThat campaign. We’re compiling the songs on this Spotify playlist!

Sleep in your running clothes

Simplify your morning routine and sleep in your running clothes. Take this a step further and put your running shoes and socks by the door. Pack everything you’ll need for the day if you don’t plan to come home after your run. Pro tip: before you get in bed make sure the clothes are clean and weren’t previously used on a run!

Getting more sleep is a great way to wake up refreshed and ready for your morning run. It also helps get you in a daily rhythm. Wake up early, complete your run, have a great day, go to bed early, repeat. If you have trouble going to sleep try eating dinner earlier, watch your favorite show before you lay down, or read a book in bed. Try to avoid looking at any screens an hour before bed.

Put your alarm out of reach

Place your alarm somewhere where you have to get out of bed to turn it off. This tactic gets your body moving and reduces the chances that you hit the snooze button. Put it next to your toothbrush, in the kitchen, or in your running shoes. Just make sure the alarm is set and the volume is loud enough to hear in the bedroom. Pro tip: if you use your phone, set your favorite song to go off when it’s time to get up.

If you’ve just started running, start small and work your way up. Longer runs can seem daunting at first, increasing the chances you stay in bed. If you’ve just started running, alternate running and walking. Eventually, you’ll eliminate walking. You can also start out by running 15 minutes and increase your time on subsequent runs. Plan your route, know it, and make sure someone else knows the route. This increases your safety and provides benchmarks so you know how much running remains.

Quite possibly our favorite tip for getting up early for a run! Your reward can be as simple as indulging on your favorite snack or as grand as a massage at the end of the month. Eventually, you’ll need to make the rewards more difficult to achieve. This will help you progress in your training and keep you from spending so much money.

Completing an early morning run gets your day started and knocks one more thing off your to-do list. Use one or all of our tips to jumpstart your morning. Is there a trick you use that we didn’t mention? Let us know on Facebook or Twitter!

Thousands of participants, friends, and family celebrate plenty of PRs at the finish line festival in downtown Austin

Start time temperature in the mid-30s quickly gave way to a cloudless sky and slight tailwind at the 26th annual 3M Half Marathon presented by Under Armour on Sunday, January 19th. Nearly 7000 participants, the second most in event history, traveled to Austin from 47 states and 22 countries. They ran Austin’s streets on one of the fastest 13.1-mile courses in the country. The unforgettable day was highlighted by plenty of PRs and the event’s first 3-time female champion. Everyone celebrated the day at the massive finish line festival that showcased live music, a beer garden, and local food trucks. 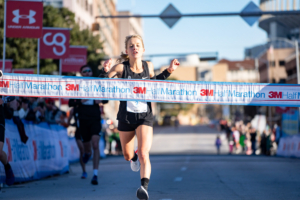 Jess Harper is the back-to-back-to-back 3M Half Marathon female champ!

“3M Half Marathon is my favorite race to start the year and shake off the holiday cobwebs,” said Austinite Jess Harper, 2020 3M Half Marathon female champ (1:13:41) and back-to-back-to-back (2018 – ‘20) female champ. “I love the race-day support from the running community and am ecstatic to win for the third consecutive year!”

Austinite David Fuentes (1:06:31) won the 2020 3M Half Marathon in his final tune-up before the 2020 Olympic Marathon Trials. Ryan Normand of Pflugerville, Texas, finished in second place (1:08:23). Wrapping up the men’s podium with the third-place finish was Nicholas Sterghos of Boulder, Colorado (1:09:47). Phillippe Rolly of McLean, Virginia, was the male Master’s champion (1:10:33). Fuentes cruises to victory in his final tune-up before the Olympic Marathon Trials.

“The goal of today was to feel confident, to feel in control, and to make this a great dress rehearsal for the Olympic Marathon Trials (Feb. 29th),” said Fuentes, who is also a 3-time Austin Half Marathon champ (2010, ‘11, ‘15). “I love racing in Austin because I love racing in my city and winning is very important. I’m proud of today’s victory!”

Harper (1:13:41) was the female champion for the third time in as many years. Bolivia’s Tania Chavez Moser, (1:14:32) and Elizabeth Northern of Fort Worth, Texas, (1:15:42) finished second and third respectively. Austin’s Michelle Cleveland (1:24:29) was the top female Master’s finisher. Jaramillo is pumped for his half marathon PR!

“I’ve been trying for years to run sub-90 minutes for 13.1 miles and it finally came together today at 3M Half Marathon,” said Carlos Jaramillo, who crossed the finish line in 1:27:59. “I’ll never forget what I accomplished at my favorite race in Texas!”

Despite chillier than normal temperatures, thousands of spectators lined the Austin streets. They cheered thousands on the point-to-point half marathon course. Their energy carried participants from north Austin and to the finish near the Texas State Capitol. Spectators hosted parties, played musical instruments, and handed out additional nutrition and hydration. The festival atmosphere stretched from the start line to the finish thanks to the on-course support of Austinites.

For those planning ahead to January 17, 2021, next year’s registration is open and set at the low price of $79. This amazing deal will be available until Wednesday, January 22nd. Don’t miss out on one of the faster half marathon courses in the country. Participants receive the best packet in the industry, full of useful 3M products. Participants can see their results on the 3M Half Marathon website and continue to share their memorable experiences on Facebook, Twitter, and Instagram. Runners can expect their FinisherPix race day photos to be ready in 24-48 hours after the race. 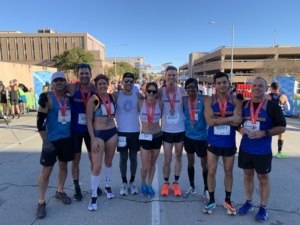 Tell your teammates to join you and register for the 2021 3M Half Marathon!