The 3M Half Marathon Expo & Packet Pick Up takes place on January 20th-21st at the Palmer Event Center! The expo is a chance for participants to visit our sponsors and partners and check out what they have to offer.

You can meet the official pacers and shop Run Austin gear from Fleet Feet. There are tons of prizes, giveaways, and discounts. Who knows, there might even be a few surprises for some lucky folks! 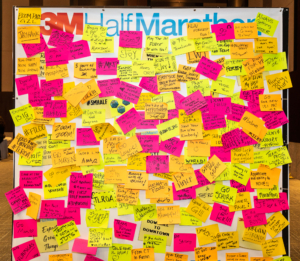 Visit the ever-popular 3M Post-it Lounge and add your message to our giant post-it wall. Leave a message of inspiration for a loved one or all participants. Or just sit back and relax before you go another round about the expo. Kids can even join in on the fun with our photo booth.

There will be several fun photo opportunities set up throughout the expo including our GIF photo booth, a larger than life-size version of this year’s finisher medal, course maps, and more. Visit them all! 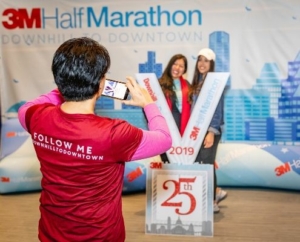 Don’t forget to tag us on social @3MHalfMarathon and #DownhilltoDowntown.

Visit the Ascension Seton Austin Marathon and chat with their Ambassadors about race day! Thinking about registering for the Austin Marathon, Half Marathon, or KXAN Simple Health 5K? Register at their booth and take advantage of their expo deals. You can even walk away with some cool swag! BONUS: take a picture in front of their sweet Austin backdrop!

Right when you exit packet pick up head to our 2024 Booth! We will have special $79 Expo only pricing + Under Armour In training shirts! 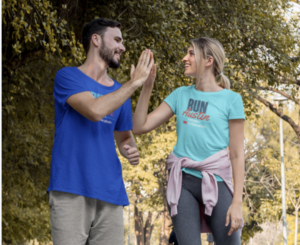 Visit our friends at Fleet Feet Austin and snag some gear to get you to the start line and beyond. They will have some Run Austin gear but it is limited so get there as soon as you can. They’ll also have hydration and nutrition for your last-minute needs.

If this is your first half marathon or you’re chasing your 13.1-mile PR, visit these folks! Meet the runners who will pace you to the finish line! These pacers are veterans and know what they’re doing. Swing by their booth, chat about race day and get your last-minute questions answered. 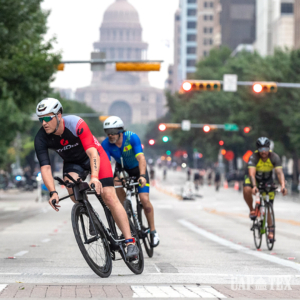 Add a little variety to your running by trying out a triathlon! CapTex Tri is Austin’s only downtown triathlon and features 3 distances including the beginner-friendly Rookie Tri Distance. Or get your friends involved, make it a team effort, and sign for a relay.

Join the 3M Half Marathon team as we take over the streets of Austin! This fun new app will have you looking forward to adding more miles to your schedule and finding new fun places to run in Austin.

Chat with Julian and his team while you make special cheer signs. As an official sponsor of 3M Half Marathon, Texas Drain Specialist is there for you on and off the course. They even have a team you can join that includes free group workouts!

Visit these other booths 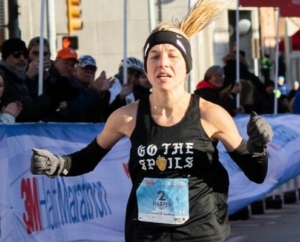 Morton finished fourth overall at the 2019 3M Half Marathon (1:08:14) even though he had to stop at one point to re-tie his shoe. One month later, he was part of a trio who paced female elites to the Olympic Marathon Trials B Standard at the 2019 Ascension Seton Austin Marathon presented by Under Armour. 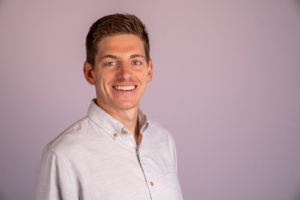 Jared Carson is the 2016 3M Half Marathon champ.

Carson is the 2016 3M Half Marathon champ, winning in 1:08:23. He and his family called Austin home for years before moving to Portland, Oregon. Carson, his wife, and their son visit Austin as often as they can. This will be Carson’s final tune-up before the Olympic Marathon Trials.

Dare resides in Fort Worth, Texas, with her husband of two years. She qualified for the 2020 Olympic Marathon Trials by running a 2:42:17 at 2019 Grandma’s Marathon. She’s in graduate school working towards her Doctorate of Physical Therapy. Dare runs with Forth Worth Distance Project. She was accepted to the Austin Half Marathon Elite Athlete Program and the Austin Half Marathon will be her final tune-up before the Olympic Marathon Trials. 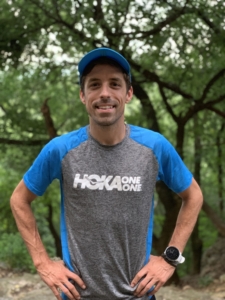 David Fuentes is a 3x Austin Half Marathon champ.

Fuentes was on the gold-medal-winning US team at the 2016 World Mountain Running Championships. He also has three Austin Half Marathon titles to his name. Fuentes made his half marathon debut at the 2010 3M Half Marathon. He logs his miles in the morning, is a software developer during the day, and a vintage vehicle restorer by night. This will be Fuentes’ final tune-up before the Olympic Marathon Trials.

Pinales is the 2017 3M Half Marathon champ (1:06:51). He was raised in Round Rock, Texas, just north of Austin. Pinales ran at The University of Texas. You can often find him running around town. Pinales also mentors Austin youth and volunteer coaches runners at Austin High.

Barrett is a native Austinite who ran the 1500m and 5K for the Baylor Bears track team. You can catch her riding her bike around town or running with her husband Jake, who is a member of the Austin Marathon pacer team. Barrett has a 2:43 marathon PR that she set in 2018. This will be Barrett’s final tune-up before the Olympic Marathon Trials. 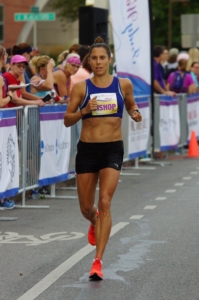 Bishop will run 3M Half Marathon as her final tune-up before the Olympic Marathon Trials.

Bishop is a former active duty Air Force Lieutenant and current mother of four. She re-started her running career five years ago and qualified for the 2020 Olympic Marathon Trials. Bishop recently turned to triathlon and placed second in the 35-39 age group at the 70.3 World Championships. This will be Bishop’s final tune-up before the Olympic Marathon Trials.

Schunk played soccer collegiately at Texas Tech University. She eventually followed her passion and joined the Red Raider cross-country and track teams. She was academic All-Big 12 and a Mountain regional qualifier every year she was on the team. In 2018, Schunk was Tech’s nominee for NCAA Woman of the Year. Like her sister Sofie, Hattie is chasing an Olympic Marathon Trials qualifying time. She is currently is grad school at the University of Texas working towards her PhD in chemical engineering. Sofie is her sister. 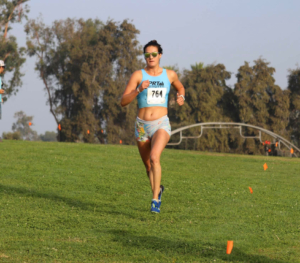 Schunk grew up in Albuquerque, New Mexico, as a multi-sport athlete, eventually playing soccer at Marquette University. She was diagnosed with Type 1 Diabetes at the age of 16. She has since mastered and controlled her diabetes enough to run a 2:49:07 at 2019 CIM. Schunk is also the co-founder of the Diabetes Sports Project, a platform for others to be active with diabetes without fear. One of her main goals is to qualify for the Olympic Marathon Trials while she continues her career in biomedical engineering research. Hattie is her sister.

Johnson is a grad student at the University of Texas studying biomedical engineering. Her research is focused on using math and computational tools to improve how they understand, predict, and optimize cancer treatments. She joined Rogue Running in 2017 and loves being a part of the Austin running community. She ran 1:24:02 at 2018 3M Half Marathon. 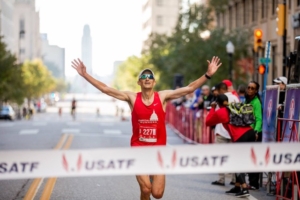 Normand is originally from Phoenix, Arizona. He now calls Pflugerville home. He ran track and cross-country for Arizona State from 2014-2018. Normand began running marathons and half marathons soon after. He recently ran a 2:29:13 at 2019 Grandma’s Marathon and will compete in the 2019 Austin Marathon elite field. 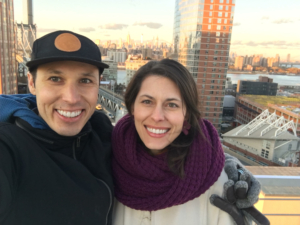 Ben and Lauren, his wife.

Munguia has called Austin home for 13 years. He’s primarily a triathlete, winning the 2017 Kerrville Triathlon half distance in 4:16:27. He recently ran a 1:16:39 at the 2019 3M Half Marathon. He lives with his wife, their 18-month-old daughter, and his favorite running buddy, Tucker the Vizsla.

If your clocks didn’t do it automatically, then you just made every clock you own “fall back.” Whether you like it or not, daylight saving time has ended and the sun will set much, much earlier than normal. In general, this means colder temperatures and less sunlight. But like they say, the training must go on! If you’re training for 3M Half Marathon or the Ascension Seton Austin Marathon, these 5 running tips will keep you safe now that daylight saving time has ended. If you’re out driving, watch out for runners and cyclists!

Reflective clothing is a must! In addition to reflective clothing, bright colors work too. Make sure you’re seen by everyone, from drivers to cyclists. Take your safety a step further and add lights. They’re lightweight and can ensure you’re seen from farther away. Depending on your preference, lights can be worn on your shoes, legs, arms, or your head.

If it’s chilly outside, dressing in layers can help your body maintain its core temperature. This is critical in ensuring you don’t get sick. It also allows you to take off layers if you get too warm and put them back on when you cool down post-run. When dressing in layers, make sure the layer closest to your body has sweat-wicking material.

Whether you like the time change or not, you should adjust your schedule now that daylight saving time has ended. If you can, run when the sun is out, coming up, or going down. This increases the chances that you’re seen by others. You also avoid running during the coldest parts of the day, especially early morning. You should always check the weather before you head out for a run.

Running defensively doesn’t mean you have to run slower. This could mean wearing reflective clothing/lights (like above), avoiding busy roads, or running in areas with high foot traffic. If you do run near busy roads, make sure you run against traffic. Expect the unexpected and briefly slowing down at intersections, parking garage entrances, and apartment/business driveways. As the amount of daylight diminishes, you need to protect yourself from others who aren’t paying attention or might want to cause harm to others.

Tell someone your workout

Before you take off, tell someone (loved one, co-worker, or roommate) your planned route, mileage, and when they can expect you back. Or ask them to run with you! If they don’t, knowing your route and mileage provides an idea of when they can expect you back and where to check should you not come back on time. Turn on the setting that allows someone to know your location, most smartphones have this.

Take your safety into your own hands with our tips. By being proactive, you increase the chances of completing a successful training run. With drivers paying less and less attention, runners need their safety even more seriously. We want you to make it to the 3M Half Marathon start line on January 19th fully healthy! Is there something you do that we didn’t list? Let us know on Facebook and Twitter. 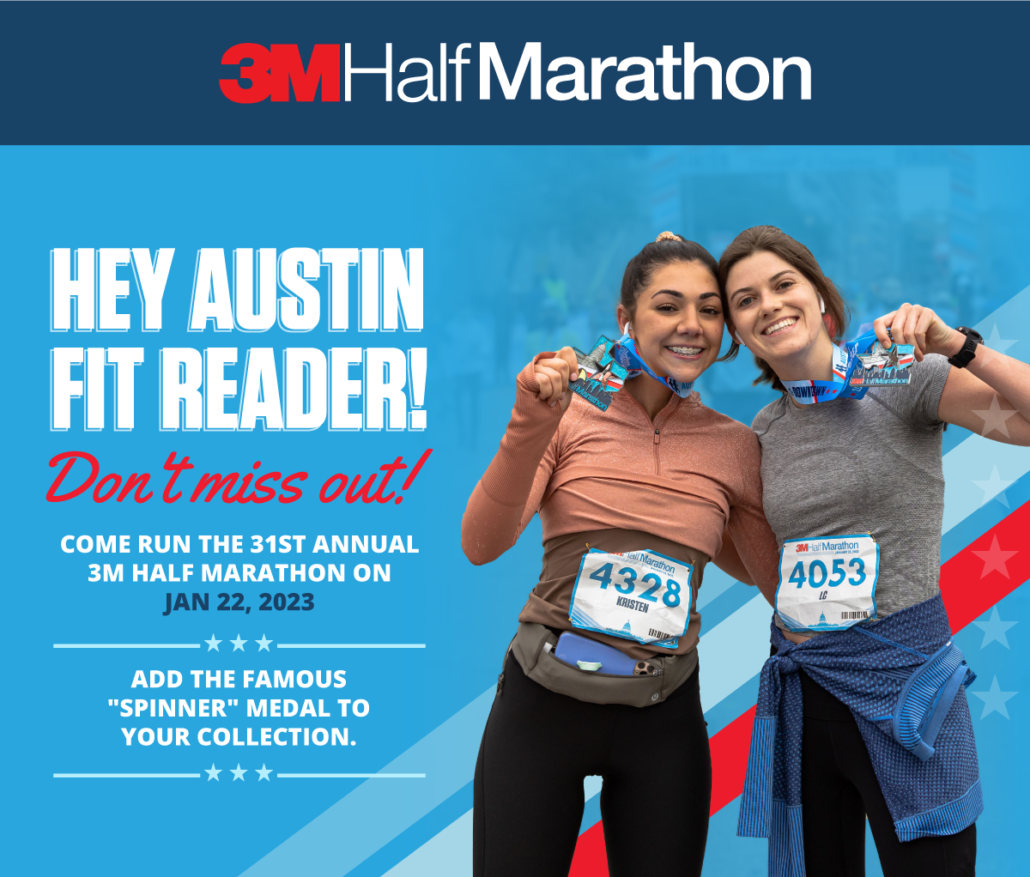